All for Joomla All for Webmasters

Ulun Danu Temple Bedugul Bali or Ulun Danu Bratan Temple Bali or also known as Pura Ulun Danu Bratan is a water temple Bali located in the edge of lake Bratan Bedugul Bali Indonesia, situated in the village of Candikuning, Baturiti sub-district, Tabanan regency Bali, The distance from Denpasar city about 56 kilometers to the north along the highway Denpasar – Singaraja. Ulun Danu Beratan temple is one of the most famous Balinese Hindu temple, it is also commonly called as Bali temple on the lake or Bali temple on the water because it looks like floating on the water when the water level in the Bedugul Lake Beratan is rising.

Short history of Ulun Danu Temple Beratan can be known based on archaeological data and historical data contained in a papyrus (Palm-leaf manuscript/Palmyra) chronicle of Mengwi .
According to archaeological data located on the left of the front yard of Ulun Danu Bedugul temple there is a stone sarcophagus and a stone board which comes from megalithic tradition period, around 500 BC. Both artifacts are now placed above each babaturan (terrace). It can be expected that the location of Ulun Danu lake Bratan temple has been used as a place for conducting rituals since the megalithic era in Bali island 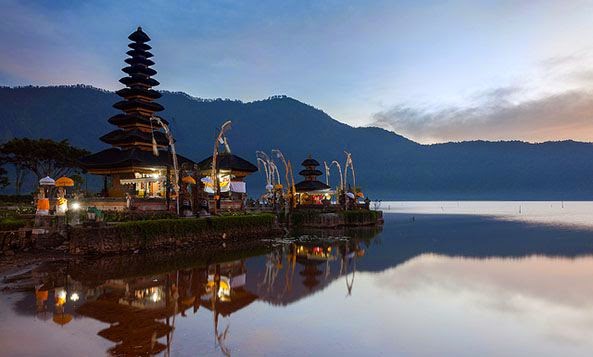 Ulun Danu temple complex consists of 4 temples, those temple are:
Lingga Petak temple, Penataran Pucak Mangu temple, Terate Bang temple, and Dalem Purwa temple serves to adore the majesty of God in its manifestation as the god of Tri Murti, in order to invoke the grace of fertility, prosperity, human well-being and for sustainability of the universe.

The other temples located in Tabanan regency

Ulun Danu temple Beratan Bedugul lake is very famous for its beauty that has become a favorite tourist spot in Bali, around this place have also been equipped with adequate accommodation such as hotels, villas, restaurants, spacious public park and souvenir shops. Not far from the location of Ulun Danutemple there are also some interesting place for holiday like Bedugul botanical gardens and Bedugulfruit and vegetable market.